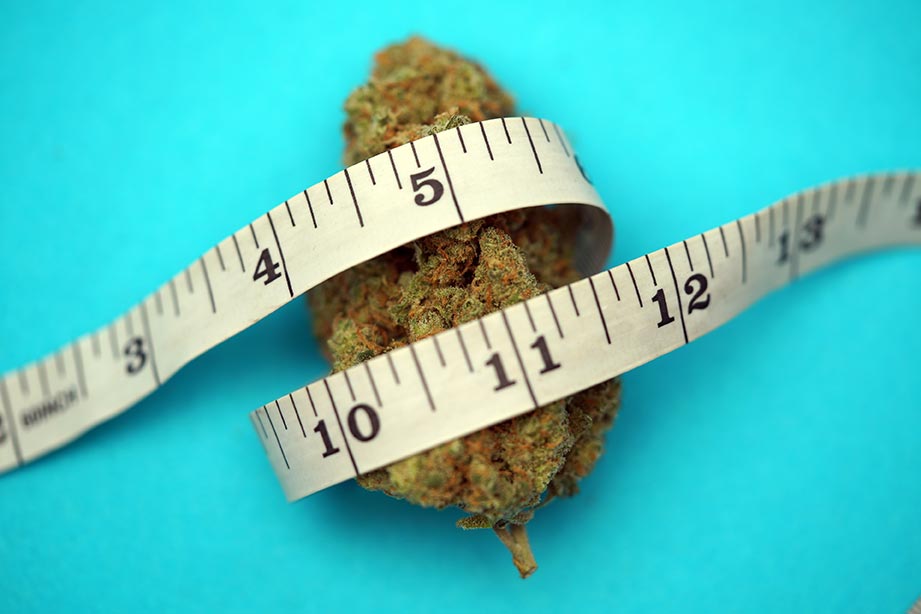 Can you get Slimmer If You Consume Cannabis?

Anyone who has consumed cannabis before understands how powerful the munchies can be. That said, regular consumers also know that these urges don’t always remain so strong. The following article will discover what scientists found when they started exploring whether cannabis consumers gain more weight.

What Are the Effects of Cannabis on Bodyweight?

While there are several guesses at why this is the case, the answer is still far from certain. Nonetheless, the widely accepted stereotypes around stoners and munchies proved to be far more complicated. As a result, two critical questions come to mind. 1. Do cannabis consumers eat more overall? 2. Are cannabis consumers more likely to be obese than non-consumers?

1. The Paradox of Cannabis and Body Weight

Early evidence came from anecdotal reports, pre-clinical studies, and cross-sectional studies. The evidence seemed to point to an association between using cannabis and body weight that may counter our expectations. After all, doesn’t weed produce the munchies? (Alshaarawy & Anthony, 2019; Sansone & Sansone, 2014).

While it may seem counter-intuitive, early evidence suggested an inverse association between using cannabis and obesity. In other words, using cannabis appeared connected to lower rates of obesity. This fascinating finding inspired many researchers to explore this seemingly nonsensical finding  (Alshaarawy & Anthony, 2019).

2. The Munchies and Hypotheses

Anyone who has ever smoked cannabis before has likely experienced the increased urge to snack. So how can we resist yummy snacks that taste even better with our heightened sensations while high?

Although individuals suffering from various diseases often use cannabis to stimulate their appetite and enhance their ability to eat, this doesn’t always lead to the expected outcome. In otherwise healthy individuals, one would expect the use of cannabis to increase snacking. Therefore, it would be logical to assume that cannabis consumers may suffer from higher rates of obesity. Fortunately, researchers soon discovered the opposite (Sansone & Sansone, 2014).

One of the early explanations focused on the differing effects of acute cannabis consumption and chronic cannabis habits. While cannabis can increase our appetite, using cannabis regularly appears to reverse this finding (Sansone & Sansone, 2014).

Yet another idea suggested that using cannabis leads to competition in the reward sites of our brain. In other words, consumers of cannabis spend less time seeking food because cannabis produces similar positive reward sensations (Sansone & Sansone, 2014).

3. Of Mice and Munchies

Studies performed on mice also provide clues about the mechanisms behind cannabis and body weight. One of these studies gave mice chronic THC treatments and assessed the effects. They found that this THC treatment reduced energy intake for these mice. Furthermore, there were no increases in body weight and adiposity (Cluny et al., 2015).

These researchers did not find that THC-induced sedation or changes in gastrointestinal actions play a significant role. Instead, they suggested that changes in gut microbiota may have contributed to the positive effects of THC on body weight.  The difference in gut microbiota appeared to modify the production of adipose (fat cells) via the actions of the endocannabinoid system (Cluny et al., 2015).

4. Studying The Role of Cannabis on Bodyweight In Humans

There has been extensive research into the role of cannabis and endocannabinoids (natural cannabinoids produced by our bodies, including Anandamide and 2-AG) in human appetite regulation. That said, investigating the association between cannabis and the general population bodyweight is less developed (Le Strat & Le Foll, 2011).

However, a handful of studies do provide a fascinating look at the associations found between using cannabis and body weight. In the future, well-controlled studies may help determine whether we can make claims around causation.

Two US-based studies explored the presence of obesity and cannabis use. Amongst participants who reported using cannabis at least three days per week, significant differences in the prevalence of obesity were seen. Among people who never used cannabis, the prevalence of obesity was 22% and 25.3% in these two studies. Compare this to the group of people who reported using cannabis more than three times per week, who had rates of 14.3% and 17.2%, respectively (Le Strat & Le Foll, 2011).

Researchers noted that tobacco smoking status could not account for these differences. Even when adjusting for sex and age, cannabis was associated with lower body mass index scores. And so, they concluded that there is an association between lower rates of obesity and using cannabis (Le Strat & Le Foll, 2011).

While cannabis consumers are not heavier than non-users, do they eat more? The evidence appears to say yes. By enhancing our sensations and perceptions, cannabis often leads the munchies. It seems that chronic cannabis consumers do consume more calories (Clark et al., 2018).

Yet, this does not appear to lead to a higher body mass index than non-consumers. Clark and colleagues proposed several mechanisms at play here. First, they suggested that the cannabinoid receptors that THC activates downregulate over time. In other words, when activating human receptors frequently, they lower their sensitivity. Receptors constantly perform this balancing act to maintain balance or homeostasis.

Second, these authors suggested that cannabis consumption leads to reduced energy storage in our cells. And third, the effects of THC on our mitochondria lead to increased energy usage. Taken together, this means that our cells use more of their energy stores to ramp up operations. Practically, these effects can be seen via the rapid heart rate and increased body temperature that occurs after consuming THC (Clark et al., 2018).

6. Will Cannabis Help You Lose Weight?

Theoretically, if cannabis consumption increases our metabolic activity (increased cell energy output), it could support weight loss. But, on the other hand, if you give in to the munchies, you can quickly eat away these benefits. Therefore, it would be wiser to focus on eating healthily and getting more activity each day for productive weight loss. That said, if you do consume cannabis, fending off the munchies (or eating healthy snacks) can result in some weight loss over time.

The evidence is clear that cannabis consumers tend to have a lower body mass index than non-consumers. This paradox has confused scientists and anyone who has ever experienced the munchies. We do not yet know why this is the case precisely. But, we do have some ideas. Research has shown us that cannabis can increase metabolic activity inside our cells. This ramping up of energy usage appears to offset the mild increase in the total daily calories seen in cannabis consumers.

So, can you use cannabis to lose weight? The answer seems to be yes, especially if you combine cannabis with healthy food and daily physical activity. While cannabis may be beneficial, anyone considering making significant life changes should have a conversation with their medical physician. Furthermore, those who are new to cannabis should always start low and go slow. Cannabis by itself should not be considered a weight-loss supplement, but it may provide a minor boost to support healthy body weight.