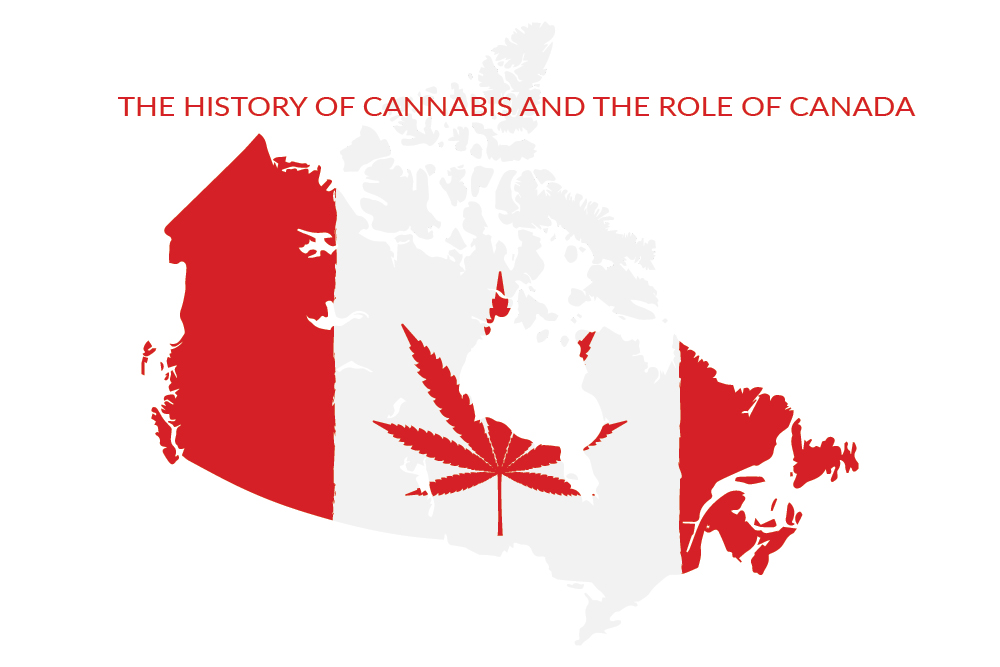 The History of Cannabis and the Role of Canada

Throughout history, humans have harvested and used cannabis in a variety of ways. Despite its industrial, spiritual, and medicinal applications, governments worldwide declared marijuana cultivation, sale, and use illegal. A plant species that were once highly regarded became the target of the war on drugs for nearly a century. In 2018, Canada became the second country to legalize its distribution and consumption.

History of Cannabis in Canada

Cannabis are thought to have originated in Central Asia, and eventually found their way to all corners of the world. Originally, these plants were cultivated for industrial, nutritional, herbal applications.

These plants were likely first used as herbal medicine in Asia around 500 B.C. Hemp, a marijuana species, were grown during ancient times to produce fibres used in making clothes, sails, rope, and paper. Furthermore, cannabis seeds were also eaten as a nutritional food source. In America, the colonists were the first to grow hemp to make textiles and rope.

In Canada, hemp production has waxed and waned as public sentiment and government interventions changed over time. The Lieutenant Governor of Upper Canada distributed hemp seeds to farmers in the year 1801 to stimulate the industry.

Years later, in 1822, the provincial parliament of Upper Canada helped provide the machinery needed to process hemp. The hemp fibre was used to create the sails and ropes of the British navy while reducing reliance on Russian hemp production.

In the 1830s, an Irish doctor named Sir William Brooke O’Shaughnessy travelled to India and extensively studied cannabis plants. He explored the herbal and recreational uses of cannabis products like Bhang, an edible mixture of cannabis, milk, and spices. O’Shaughnessy also took note of the use of cannabis as a traditional medicine for stomach pain, vomiting, cholera, and more.

When his report was released in Britain, interest in using cannabis as a medicine quickly spread. By the late 1800s, cannabis extracts could be found in pharmacies throughout Europe and the U.S. This was long before scientists had even discovered THC and how it interacted with the human endocannabinoid system.

Although cannabis use was mostly medicinal, it also grew in popularity as a substance that can induce psychoactive effects. In 1923, the Canadian government introduced the Narcotics Drug Act Amendment Bill, which prohibited opium, cocaine, and morphine. Unfortunately, cannabis was also included in the list of prohibited substances.

The War on Drugs: Cannabis Persecution

The first known use of smoked cannabis flowers and seeds is said to have begun in Central Asia. Iranian nomads, called Scythians, were thought to use cannabis before committing assassinations. Hashish became the cannabis product widely used throughout the Middle East and parts of Asia after 800 A.D.

The recreational use of cannabis in North America was not noted until the early 1900s. Immigrants from Mexico are thought to be the first people that brought recreational cannabis consumption habits along with them. The African American community also quickly found uses for cannabis at this time. While white Americans also likely consumed cannabis, the drug was associated with immigrants and people of colour.

It is widely accepted that racial undertones led to the criminalization of cannabis. The US government passed the Marijuana Tax Act in 1937 in hopes of crushing cannabis use. Industrial hemp was allowed to persist, and it did until about the year 1957. The fibre of the hemp plant served many important functions during these times of war. It was not long after this time that hemp fell from graces and became collateral damage of a new war.

Richard Nixon repealed the Marijuana Tax Act and replaced it with the Controlled Substances Act of 1970. It was at this point that cannabis was listed as a Schedule I drug alongside heroin, ecstasy, and LSD. Anti-drug programs were funded and criminal persecutions grew rapidly.

It was not only in the US where cannabis use was severely persecuted. America got the global community to join them in their war on drugs. International drug conventions were created to ensure a global effort against this plant. Canada was yet another country that fell in line and waged a war on cannabis.

The first seizure of cannabis did not occur in Canada until 1937, likely due to legislation passed in the United States. In the following decades, however, very few arrests were made. It was not until the 1970s that persecution exploded. As cannabis emerged as a popular drug of choice for hippies, college students, and minority populations, the arrests grew rapidly. In 1968 alone, 2300 cannabis convictions occurred in Canada.

The first cannabis smoke-in occurred in Vancouver’s Gastown district in 1971. The police responded by starting a riot and forcefully dispersing the crowd using police officers on horseback. Protesters were beaten and arrested, but they did not stop fighting.

It did not matter that even government-commissioned reports found good reasons to reduce cannabis penalties. The Canadian government-funded Le Dain Commission of 1972 investigated the non-medical use of cannabis and suggested the removal of persecution for personal possession.

Arrests for cannabis possession continued throughout Canada as the war on drugs was waged. Little progress was made until one arrest changed the course of cannabis history forever.

Terrance Parker was arrested for cannabis possession, cultivation, and trafficking in 1996. He used cannabis to control his epileptic seizures that did not respond to any of the prescription medication options. Parker, however, did not lay down and accept this unjust persecution. Instead, he appealed to the Canadian Charter of Rights and Freedoms for the right to smoke cannabis medically.

After years of fighting and working his way up through the courts, Parker finally had his case heard by the Ontario Court of Appeal. In the year 2000, this court determined that cannabis prohibition infringed on his right to life, liberty, and security of person.

This ruling made cannabis prohibition unconstitutional and mandated that the government change the rules or potentially have them thrown-out altogether. In response, the federal Canadian government enacted the Marihuana for Medical Access Regulations (MMAR). This legislation allowed licensed patients to grow cannabis themselves or buy it from licensed growers.

In the following years, the Liberal Party of Canada attempted to decriminalize cannabis several times. Unfortunately, each effort was defeated, largely due to the influence of the United States.

Further legal battles forced the government to update the regulations around cannabis. As a result, the Marihuana for Medical Purposes Regulations (MMPR) was implemented in 2013. The rules were changed to create a legal commercial cannabis industry so that medical cannabis patients could buy through this system.

The suspension of personal cannabis production, though, was a sticking point for the MMPR. Neil Allard challenged these news rules and won his case in the Federal Court of Canada. And so, the rules were revised once again, creating the Access to Cannabis for Medical Purposes Regulations (ACMPR) in 2016.

In the following year, the federal government proposed the Cannabis Act. This bill legalized the possession, use, cultivation, and purchase of cannabis by adults. The bill was passed and came into effect in October 2018.

Canada became only the second nation at the time to legalize cannabis for adults. Uruguay had done so earlier, but those regulations only allowed adult citizens the right to purchase and use cannabis. Unlike Uruguay, all adults in Canada could buy and use cannabis, permitting visitors to the country to partake.

Starting on October 17, 2018, all adults in Canada could purchase dried flowers, oils, seeds, and cannabis plants. One year later, cannabis 2.0 came into effect, allowing infused edibles and beverages, and cannabis concentrates to also be sold. Canadians were allowed to purchase and carry up to 30 grams at a time. Nearly all Canadians could also cultivate cannabis themselves, aside from those in two provinces.

The Canadian government also made an effort to also forgive past criminal records on cannabis possession. This process has had its flaws, but progress is being made to right the wrongs of the past.

As Canada awaits the rest of the world catching up, it has bravely changed the course of history forever. While far from perfect, the Cannabis Act has ended the war on cannabis. There have been nearly zero cannabis convictions in Canada since this dramatic shift. Police officers are now free to focus on illegal cannabis cultivation and trafficking, along with working to keep the roads safe from impaired driving.

In the years since marijuana legalization, Canadian cannabis companies have created an industry that contributes to  taxes and employs thousands of Canadians. The Canadian economy is better off and no more citizens are unfairly punished for simple possession of Cannabis. The era of cannabis persecution is over, and cannabis is on the path back to glory. Weed Me is proud to be at the forefront of this brave new world.